Incense culture was introduced to Japan with Buddhism through “incenses for prayers”. The idea of “listening” to the fragrance gave rise to the word and act of 'Monkoh' (literally, listening to what fragrances are telling you). Around end of the Muromachi period (1338-1573), after about 1500 years since their introduction, the act of using incenses started to develop into in art form called Kodo, or incense-smelling ceremony. The basics of the art, which have been passed on until present day, were formed in the Edo period (1603-1867).

In 595, when an islander of Awajishima put driftwood on a fire, an inexpressibly exquisite fragrance came out from it, amazing the islander. He took the driftwood to the capital and presented to the Empress Suiko. The regent, Prince Shotoku, explained that it was a rare and cherished treasure called "Jinkoh" or Aloeswood. Thus, incense culture was introduced to Japan. It spread across Japan with Buddhism, becoming known as "incenses for prayers”.

Over time, the idea of using "incenses for play" developed among aristocrats during the Heian period (794-1185). Not only were incenses used to make offerings to the deceased, but they were also used to give fragrance to rooms or clothing, and people started to enjoy fragrances simply as they are. Furthermore, incenses were used by Heian aristocrats to show one's intelligence or sensitivity, and became a means of expressing one's aesthetics or a symbol of one's rank. You can learn in detail about the elegant ways of incenses during the Heian period in stories such as "The Tale of Genji" or "The Pillow Book".

After that, from the Kamakura period (1192-1336) on, warriors started to use incense and tea as a way to relax in the intervals between fierce battles. A warrior’s tastes and aesthetics would drive him to seek valuable aromatic woods, and they began to find pleasure in savoring a particular fragrance, or comparing different ones.

In the latter half of the Muromachi period (1338-1573), the eighth shogun, Yoshimasa Ashikaga, developed the foundations of using incenses as an art form. Eventually, two major schools were formed: The Oie school of aristocrats, founded by Sanetaka Sanjonishi, and the Shino school of warriors founded by Soushin Shino. These schools practiced and further developed the Kodo culture.

In the Edo period (1603-1867), incenses became popular among wealthy merchants and townspeople. Kyara (Premium Aloeswood) became a synonym for high-class and top-quality items. Incenses became a part of the Edo culture. Incenses became incorporated into people’s everyday lifestyles and their leisure activities, while maintaining an indispensable role in Japanese spiritual culture.

The Meiji period (1868-1911), with the wave of civilization and enlightenment, also brought a period of decline for Kodo. However, stimulated by the western influence, a new incense culture was born, one centered around the perfumes and fragrances we enjoy today. Now, the true value of the traditional culture of Japanese original "Kodo" has been reexamined and is attracting an international attention as a part of Japanese culture as a whole. Incense ceremonies are being held overseas, heralding the arrival of a "new Kodo age".

Warming a aromatic wood (considered a gift from the heavens) without burning it, and listening to the subtle fragrance with your heart is the basics of "Monkoh". It is also called Icchuugiki, or Kanshoukoh (fragrance appreciation). The concept of listening to aromatic wood eventually developed into a form of guessing game. People also began to use fragrances as a way to enhance their enjoyment of literature, or the seasons. This act has come to be called "Kumikoh".

Occasions or meetings where Monkoh or Kumikoh are held are called "Koseki" or "Kokai". In a standard Kokai, Kumikoh that correspond to the season are chosen, and ceremonies are held. Hundreds of Kumikoh were made over the past 500 years, and they have been passed on like scripts to be used in Koseki. In Koseki, the Komoto, or ceremony host shows his skills and passes Incense burners to each guest in turn. Guests listen to one incense burner at a time, and provide their answers according to the rules of that particular Kumikoh. There are two major schools: Oie School, which is called the Kodo of aristocrats, and Shino School, which is called the Kodo of warriors. 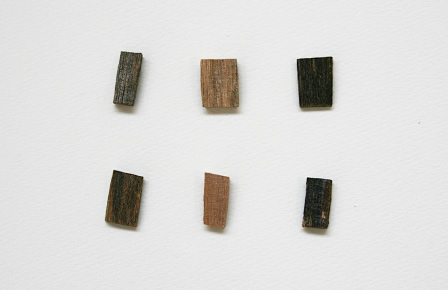 The aromatic woods that are used in Kodo are classified into six types, called "Six countries". Aromatic woods selected by Kodo masters are given names of places that recall their origin such as Kyara, Rakoku, Manaban, Manaka, Sasora and Sumotara (they are not necessarily the same as where these trees are actually produced today).

It is hard to express the fragrance of aromatic woods using words, so people in the old days used flavors as clues instead to tell fragrances apart. Sweetness, sourness, spiciness, bitterness and saltiness are called the 5 incense flavors.

The name ”Koju” was born in Kyoto during the reign of the Emperor Oogimachi in the Tensho period(1573-1593).

The original Koju was a twelfth generation descendant of Yoshisada Yasuda of Seiwa Genji (guardians of Totomi Province when the Kamakura shogunate was established) whose name was Yasuda Mataemon Minamoto Mitsuhiro. According to the records, Koju has been serving the imperial family since Yasuda Mataemon’s time.
According to the records, the second generation Koju, Masakiyo, was summoned by Lord Hideyoshi. The fourth generation Masanaga was summoned by Lord Ieyasu.

In the Edo period, the eighth generation Koju, Juuemon, made many incense and was called the incense meister. Since then, it has become a tradition for Koju meisters to inherit the name of Juuemon. According to the records, Koju’s neriko (blended incense balls) gained great renown after he delivered incense called “Chitose” to Emperor Koukaku, “Kokonoe” to the Omotesenke school, and “Wakakusa” to the Yabunouchi tea ceremony school.

A reference book written by Juuemon himself called “Koju Juuemon's family blending book” still exists today. The text has a vibrant, vivid feel, making the reader feel as if they are learning Juuemon’s teachings through oral tradition.

At the end of the Edo period, one of Koju masters, Takai Juuemon Yoshimasa, became involved with a private school in Kyoto run by Boyo Yamamoto for many years. He researched western fragrances and found great success in the area of herbalism as well.
You can find a description of Koju’s life in Muromachi Shimochoujyamachi, Kyoto during the Meiji, Taisho, and Showa periods in the “Tea ceremony dictionary” (1956 edition). One passage reads, “The ‘incense store’ shall be protected with Shizuma Sasaki’s ink mark, white cloth and store curtain.”

Thereafter, Koju became the specialized incense company it remains today. It has been involved with incense and incense cultural activities in Tokyo under the name of “Ginza Koju”. After half a century, in April, 2016, Koju returned to its birthplace of Kyoto, and opened a small store in Ninenzaka. The time-honored, elegant culture of Kyoto has been combines with new creations from Ginza, Tokyo to deliver incense products for the present day that spiritually enrich people's everyday life.

The ten virtues of koh became famous in the Muromachi period through the writings of the zen high priest Ikkyu Sojun. Many intellectuals at the time simply knew about it as something written by a renowned priest who was a scholar and an incense enthusiast. Ikkyu was believed to be an illegitimate child of the Emperor Gokomatsu who was also known as an incense lover. Emperor Gokomatsu authored a study about incense blending called “Gokomatsu’s incense blending methods.” A copy of this old document is still preserved to this day at Koju, along with old references from the Tensho period that belonged to the original Koju himself.

It is written in the document that the original Koju (Yasuda Mataemon Minamoto Mitsuhiro) started calling himself Koju when spreading his famous “Ten Virtues of Koju” during the Tensho period, which began with the start of Nobunaga Oda’s rule.

■Modern-day Koju
It has been over 1400 years since numerous Japanese incense cultures were originally created from the precious heaven-sent aromatic woods, which accompanied the introduction of Buddhism to Japan. Koju was born into that period of history, and continues to keep the old traditions while creating new ones. With products ranging from Koju’s traditional blended incense balls (Kurobou), an incense product named after Juuemon, to aromatic woods themselves, Koju delivers valuable incense products that satisfy the needs of today’s customers.

Go back to top